In Copenhagen, in the city center, stands Amager Bakke. Amager Bakke, renamed Copenhill because it aims to represent a green hill inside the city, is one of the most technologically advanced waste-to-energy plants in the world, designed by the award-winning Danish architecture practice, the Biarke Ingels Group (BIG).

A huge building, but also a work of art of unquestionable architectural beauty. The plant has changed not only the skyline of Copenhagen but is destined to globally redefine the environmental sustainability.

Copenhill is an extraordinary facility for energy efficiency and low environmental impact, but there is another peculiarity that makes it unique in the world. The innovation of this plant results from the idea of transforming a simple electricity generating plant into a recreational facility. Copenhill will have mainly a ski slope – that will start from the roof of a 90 metre high facility to the bottom of the incinerator itself, approximately 400 meters in length – with a skiing surface of about 10,000 square metres.

Neveplast, a global leader within the dry ski-slope industry, was chosen in June 2017 as the official supplier for development of the dry ski-slope project on the rooftop of the Amager Bakke plant. The final agreement was signed last year, but the first contacts between the Danish Foundation and the Italian company date back to 2011. Allocation of the project was officialised after Neveplast won a very strict and selective tender procedure with the involvement, among the participants, of all the main manufacturers of dry ski slopes worldwide.

The aim of the promoters of the Copenhill projects was to select a high quality product, among the leaders in the industry, as similar as possible to snow and also eco-friendly. Safety and aesthetic standards were to be respected too. Neveplast wins obtaining the highest points.

For the project Copenhill, Neveplast developed an “ad hoc” surface with 5 different color nuances, The objective of the Danish contractors within the large eco-friendly philosophy promulgated, is to make the dry ski slope look like a natural mountain field. A challenge that the Italian company, attentive to the environmental issue, accepts with enthusiasm.

The 300 meters of medium to easy ski slope was opened to a small number of Danish riders, freeskiers and telemarkers, at the beginning of the year. They performed in forward and switch pace.

From the comments e from the smiles on their faces while skiing on the ski slope you can bet Copenhill will be a success.

We now wait the official grand opening of the ski slope planned in spring 2019. Between March and April, the date has not yet been defined. There will be an official inauguration.

In Italy, Amager Bakke has been the center of media attention in the last month. Some of the best national and international networks have spoken about Copenhill and Neveplast. Below are some examples: 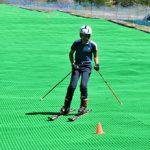 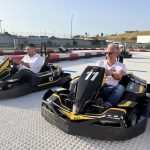 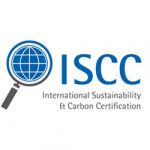 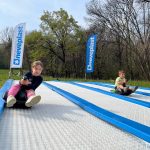