Home > News > Biathlon with Neveplast in the centre of Aosta

Biathlon with Neveplast in the centre of Aosta

Biathlon with Neveplast makes a show in the centre of Aosta.

In Valle d’Aosta from February 13th to February 16th 2020  took place the third edition of the winter Alpiniadi: the Olympic Games of the Alpini, reserved to all those who are members of their National Association.

A call for the snow challenges of La Thuile, Cogne, Pila/Gressan, and Aosta, to which the so called “black feathers” responded with record numbers.

The most awaited race, especially for the contest and the modality in which it was held, was the Biathlon race in the Aosta square.

The Chanoux square, right in front of the town hall’s architectural elegance, was the beating heart of the biathletes’ races, who, for the first time in history, competed on a street circuit, on the Neveplast synthetic surface, which simulates the actual snow ride.

The ring was 250 meters long, it covered the whole square and had to be done three times in classic technique. The format consisted in shooting with laser rifles standing, which shone a white light in case of centered target. At the range there were altogether six shooting lanes.

Choosing the city format was clearly a winning idea: an incredible performance in the city of Aosta, which responded with a very appreciative crowd, ready to liven up the square from early afternoon until late night.

The actual race, valid for the biathlon title, counting 200 competing athletes, started at 17.30 and finalized only in the late evening. However, the entertainment at square Chanoux had already begun in the early afternoon, with a free non-competitive demo, open to young people, which gave everyone the chance to experience the Neveplast set-up and the range shots.

The purpose of the promoters was to increasingly introducing the biathlon discipline, especially to the youngest. And what better way to promote something than bringing it to the city, in the midst of people?

Bringing the mountain to the city is Neveplast’s mission: Neveplast is a Bergamo-based company, leader in the field of artificial ski slopes. For 20 years, thanks to its thousands of worldwide installations, this company made true the dream of skiing 365 days a year even in the city, with the normal equipment employed on snow.

Neveplast is used to bringing snow into the city, in unusual and prestigious contests. One of its last challenges was realizing a ski slope on the roof-top of the waste-to-energy plant in the center of Copenhagen. As regards to the Nordic skiing, a few years ago, in occasion of a “Nature and Sport” event, Neveplast provided a synthetic slope for a demo in Piazza del Popolo, in Rome, between historical buildings full of history and legends.

“When Carlo Bionaz, president of the Val D’Aosta department, contacted us – explains Cesare Locatelli, Neveplast’s sales manager – for the Biathlon square project in the Alpini Olympic Games contest, we immediately shared the identical viewpoint. The Biathlon race at the Chanoux square needed to be an unforgettable occurrence, capable of reconciling both the competing athletes and the massive audience, which would for sure be curious to attend this amazing performance. The synthetic Neveplast surface was very appreciated by the athletes, and I believe that the crowded and celebrating square are the proof that this experiment was successful.

We hope that from this trial – concludes Locatelli – similar initiatives will emerge, perhaps a street circuit with multiple stages in the Italian squares.”

And while the “black feather” athletes were competing in Aosta, in Anterselva continues the battle for the Biathlon World Championship medal. The question arises of whether the calendar concurrence was just a randomness or was intended.

“A lucky coincidence – replies Carlo Gobbo, one of the most loved voices between the alpine ski commentators, who was also the press office leader at the Alpine Olympic Games – but the concomitance with the Anterselva World Championship gave even more fascination and competitive spirit to our Olympic Games. I say “our”, because before being a journalist, I myself am an Alpino, and the fact that my Valle d’Aosta hosted this third edition fills me with so much pride – winks Gobbo -. “Biathlon has a huge tradition in this region, where over the years international athletes were born and grew up.  Just think of Patrick Favre, nowadays at the side of the French champion Martin Fourcade. Nevertheless, it’s been a memorable three-day event, and the image of the crowded Chanoux square during the magical night of the Biathlon, with also the suggestive lit tripod is something that I will forever carry in my heart” – concludes Carlo Gobbo. 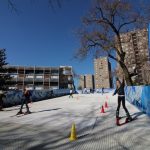 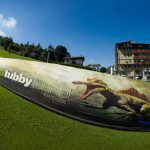 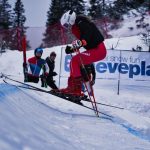 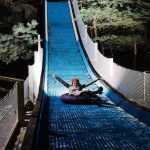